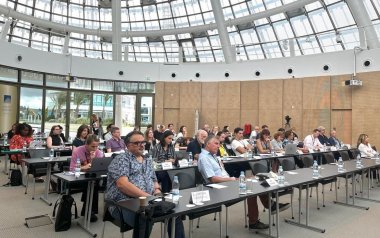 This request of Ukraine was supported by several members of the Alliance, including the Charter of Journalistic Ethics of Georgia, which considered that in light of the Russian invasion of Ukraine, extreme restrictions on media freedom, and large-scale propaganda, the Russian Press Council could not fulfill its duty and, therefore, could not be a member of the Alliance of Independent Press.

In our opinion, the debate and voting on Ukraine's initiative were not democratic. Two-thirds of the conference participants rejected a vote on whether the Russian Press Council should leave the Alliance, and Russia remained a member of the Alliance, although it was demoted to associate membership. In protest, the Press Council of Ukraine left AIPCE.

The Press Council of Ukraine protest was considered fair by The Georgian Charter of Journalistic Ethics and the ethics councils of 8 other countries (Armenia, Moldova, Finland, Norway, Sweden, Estonia, Denmark, and Ireland) and suspended the membership of the Alliance.

"The fact that Ukraine is no longer a member of the Alliance and Russia makes it impossible for us to stay in AIPCE. Freedom of the press is practically non-existent in Russia today, and the entire media sector is part of Putin's monstrous propaganda machine.

We all support the goals of AIPCE and the development of independent press and press councils in Europe. We will continue to support any initiative to create sustainable self-regulatory bodies and consider returning to an alliance where Ukraine is present. We have the opportunity to share best practices, ideas, and values," said a joint letter prepared by the press councils and sent to the AIPCE Steering Committee yesterday.

The Georgian Charter of Journalistic Ethics once again expresses its support to the Press Council of Ukraine and Ukrainian journalists and adds that it is unacceptable for us to be a member of such an organization, which today cannot answer and protect the values for which the Charter joined it.