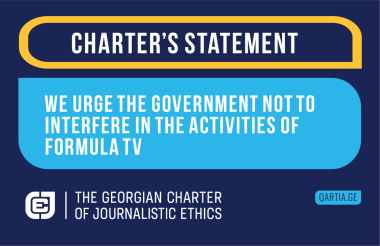 Two days before the elections, it became known that the Ministry of Defense had filed a lawsuit against the owner of Formula TV, Davit Kezerashvili. According to the General Director of the Media Outlet - Zuka Gumbaridze, there is a danger of seizing the property of the TV company.

The Georgian Charter of Journalistic Ethics believes that such an action before the elections may serve to hinder the activities of media outlets being critical towards the government.

It should be noted that this is not the first case when legal proceedings have been initiated against media outlets being critical towards the government.

Charter of Journalistic Ethics urges the government to understand the role of the media in a democratic state and not to interfere with the media activity.