Kakha Kaladze's Statement is a Threat to Democracy 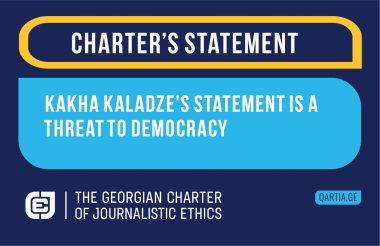 On September 29, 2021, the incumbent mayor of Tbilisi and the Georgian Dream mayoral candidate, Kakha Kaladze, called the journalists "radicals", "the dirtiest people" and "the head of hatred and evil.".

The Charter of Journalistic Ethics condemns Kakha Kaladze's statement and considers that such an attitude towards the media is characteristic of authoritarianism.

The Charter considers this to be an incitement to hatred towards the media, which is especially dangerous during the election period. It is noteworthy that Kakha Kaladze had previously been known for his aggressive rhetoric towards journalists when he compared the activities of the media on July 20, 2021 to the actions of violent groups.

The Charter of Journalistic Ethics has repeatedly stated that the aggressive rhetoric of politicians in Georgia creates a polarized media environment and negatively affects the safety and professionalism of journalists.

The Charter of Journalistic Ethics calls on the authorities not to encourage attacks on members of the media by their aggressive attitudes and to stop talking about restrictive norms of freedom of thought, speech, and expression, to support media freedom, and to switch to business relations’ mode.