Violent groups are persecuting and abusing the media representatives on Rustaveli Avenue. The Charter urge the authorities to ensure the safe operation of the media 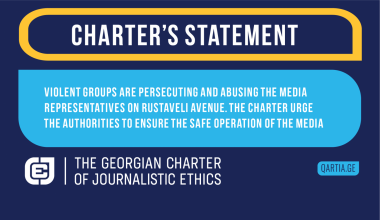 
According to our information, about 40 journalists and cameramen were injured. A list of them can be found here. (a list may be updated)

The Charter urges the Ministry of Internal Affairs to protect media representatives from illegal interference and violence in their journalistic activities.

The Charter of Journalistic Ethics urges the government to protect the safety of journalists and create appropriate working conditions for the media in the course of their professional activities so that citizens have the opportunity to receive information about the current processes.

The Charter of Journalistic Ethics will always protect the rights of journalists and the high standard of freedom of expression.