The Charter’s complaint against propaganda materials 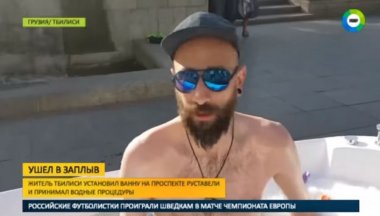 Charter’s first complaint addressed the material published by mir24.tv, which informs, that because of the inability of the Georgian government to provide water and electricity, Georgian man has placed a bath in the city, as a form of a protest. In reality, this was a performance, that was covered by “Liberali”. The respondent states in the interview, that “The water is warm, I’ll now add cold water and lay in it again”. Mir24 translated his words as “I’m hot. It’s +35 degrees in my house and I can’t turn on the air conditioner because I don’t have electricity”.

The Georgian Charter of Journalistic Ethics deemed that the journalist used manipulation for political reasons. The material is propaganda, this is further proved by the fact, that the creators of this journalistic product are purposely falsifying the facts, in order to convey to the audience, that the social background in Georgia is very tough and that because of the Government’s inaction the population was left without water and electricity supply for days, which in turn made the population take baths publicly, in order to attract the Government’s attention.

It is clear, that the goal of the author of this journalistic product was to insult the image of a neighboring country, to demonstrate it as a country, that cannot provide basic living conditions to the population of its capital city.

Web-site haqqin.az has published a material “Anti-Azerbaijani underground movement in Tbilisi: Reveal, money, instructions”. The article evaluates the so called “Colorful revolutions” in Georgia and Ukraine, the base of which were economic problems and low living standards, as a result of “western hegemony”, in turn the western hegemony is evaluated as a hazard, that causes destabilization. The article also notes, that Mikheil Saakashvili and organization “Kmara” were supporting destabilization of Azerbaijan, but Ilham Aliev managed to neutralize the Georgian revolutionary forces.

The article supports one of the main messages of anti-western propaganda – that behind the “Western conspiracy”/”Western hegemony” stood George Soros and non-governmental organization affiliated with him. It also states, that Tbilisi has harbored the Azerbaijani revolutionary organizations, that were planning to cause civil confrontation. The article also mentions Azerbaijani journalist Fagan Mukhtarli, who was kidnapped from Georgia. He was accused of affiliating with organizations who had “hostile” attitude against Azerbaijan.

The Georgian Journalistic Charter deems, that the material intends to cause hostile attitudes between two countries, as it placates Georgia as a country that has hostile intentions towards Azerbaijan, where anti-Azerbaijani actions and civil wars are being planned. None of the facts mentioned in the article have been verified against any source, that causes a doubt, that they’re mostly false and a result of the journalist’s imagination. "The West” and the NGO-s supported by the west are described as enemies, that cause the destabilization of countries.

The self-regulation council committee against propaganda was formed with support from European Union. The representatives of Councils have accepted the Way of case administration in 2016. Thanks to the committee, any citizen can file a complaint if they think that the media of any member country is using manipulation or hate-speech. Any member self-regulation body has a representative in the committee. The Charter, who is also a member of the committee, is represented by Maia Metskhvarishvili. Complaint of Georgian Charter of Journalistic Ethics is the first, which the committee will review in recent history.